Waterproof Lab has joined forces with Koster Bauchemie AG. Inline with Waterproof Lab to be the premium distributor and installer of premium waterproofing systems for the building industry in Africa this was a perfect fit.

Koster specialises in the production of high quality waterproofing systems, operates in more than 50 countries and is based in Aurich, Germany. WPL and Koster values are neatly aligned. We believe in environmental protection and a never compromising eye on quality.

OUR SOLUTION WORKS, HERE'S WHY...

Rising moisture in masonry over a longer period of time can lead to considerable damages. An indication of these damages is salt efflorescence, flaking plaster, moist wallpaper and the formation of mold which can be harmful. KÖSTER horizontal barriers stop rising moisture in new construction and existing buildings to protect the valuable building Rising (or “wicking”) moisture is among the most frequently encountered causes of damage in masonry walls. The results are clearly identifiable through the spalling of plaster, damaged joints and bricks, and also through salt efflorescence and algae growth. Damage from rising moisture can be avoided by the installation of a horizontal barrier.

The easiest and most successful KÖSTER system to install a horizontal barrier in existing walls is the KÖSTER Suction Angle System with KÖSTER Crisin 76 Concentrate. KÖSTER Crisin 76 Concentrate is a very thin fluid resin which penetrates into the smallest capillaries in the building material, stops the capillary action permanently and also has a hydrophobizing effect.

Boreholes are drilled regularly spaced depending on the wall thickness. KÖSTER Crisin 76 Concentrate is injected without pressure into the wall via the KÖSTER Suction Angle and the KÖSTER Capillary Rod which acts as a wick. The pressureless system uses the same capillary action which is the cause for rising damp.

Thereby rising moisture is stopped with the aid of its cause. The big advantage of the KÖSTER Capillary Rod is that it doesn’t waste material in cracks or voids. Only where the rod touches the wall of the borehole will the material be released.

You might also want to read more about Koster Aqua TPO 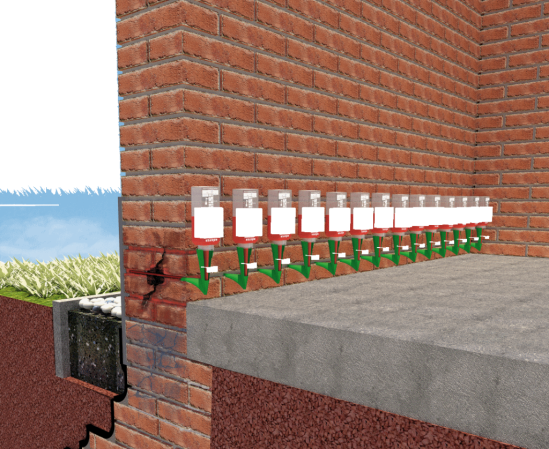